Case3 What to do when accurate SpO2 cannot be detected

There are some cases that are difficult to measure SpO2 such as with restless patients due to body movement. In order to detect accurate and stable SpO2 measurement, the probes should be attached in position.

(1) Make sure that the light emitter and the photo detector face each other as in the image below.

(2) When the probe is used on a finger, place the LED on the root of the finger nail.
Following illustration shows a good example and a bad example of attaching disposable probes.

Pay attention to the tightness of tape attachment in the case of adhesive-type SpO2 probes or those that are attached using surgical tape. 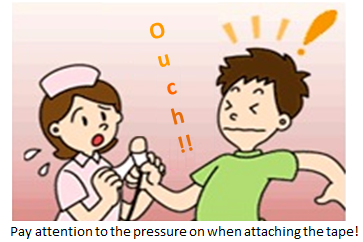 Even if the tape is not too tight when it is applied, some types of surgical tape contract after application, resulting in excessive pressure after a period of time.  On the other hand, as the light emitter and photo detector parts must be in close contact to the measurement site in the measurement using a pulse oximeter, looseness also causes problems.

Therefore, tape-type probes should not be attached tightly, but “apply the tape gently along the skin.”
Use genuine Nihon Kohden disposable probes!

Ideas for Fixing the Probes

For restless patients, precise measurement can be prevented often by the displacement and detachment of the probes. Although fixing the probe is important, the use of additional surgical tape over the probe not only increases the pressure on the probe attachment site but also hinders the dissipation of heat from the LED.
The following simple ideas can ensure stable measurement while preventing pressure.

*Following illustration shows how to do Ω (Omega)-Shaped Taping:
The tape is wrapped around the cable using a pinching action and the leg parts of the tape is attached to the skin.
(The movement of the cable is not directly transmitted to the adhesion surface.)

Attention!
Avoid the use of elastic tapes and elastic bandages as much as possible.
Although these surgical tapes and bandages are convenient for the purpose of covering and fixing the probe, they gradually tighten after attachment and they will cause skin problems. If they are used out of necessity, check the condition of the probe and surrounding areas at shorter intervals.